Australian Federal and State governments have embraced offshore wind potential as a mechanism to increase the contribution of renewable energy and meet emissions reduction targets. The Federal Government recently announced six regions across Australia with the potential for offshore wind projects, with Gippsland in Victoria the most advanced.

State governments have committed to ambitious renewable energy and emissions reduction targets with offshore wind energy increasingly viewed as a critical component to meet these goals. The Victorian government is aiming to generate approximately 20 per cent (2GW) of its energy needs from offshore wind by 2032, 4GW of offshore wind capacity by 2035 and 9GW by 2040.

Established almost 30 years ago, DP Energy has developed over 1GW of renewable energy projects across Australia, Canada, Ireland and the UK with three quarters of these projects already built and operational. It also has an immediate pipeline of a further 750MW due to enter construction in 2023 and an extended pipeline of some 6GW beyond that. These projects variously incorporate both on and offshore wind, solar and ocean energy technologies. DP Energy’s lead Australian projects include the 320MW Port Augusta Renewable Energy Park in South Australia, and the 430 MW Callide Wind Farm in Queensland.

DP Energy Australia Director and Country Manager Catherine Way said DP Energy had been looking at offshore potential in Australia for a number of years and had previously identified development opportunities within the Federal Government’s recent declaration of areas for offshore wind projects. “We will draw on our long international experience in developing renewables projects, and more recently in offshore wind energy to develop Australian projects, which could include fixed and floating platforms depending on water depths,” Ms Way said.

“the increased focus from Federal and State governments on offshore wind energy is encouraging and the potential for a large island country such as Australia is significant. However, Australia is playing catch up with the rest of the world, particularly Europe, where this technology is more progressed and already a considerable contributor to the region’s renewable energy mix.

“As we bridge this gap with the rest of the world there is going to be significant investment in offshore wind energy in Australia, which will deliver jobs, growth and reduce the reliance on fossil fuels for the country’s energy security. At DP Energy, we are currently exploring opportunities, either as our own stand-alone projects or in partnership with other operators, as we have done successfully in Australia and overseas for many years.”

See attached map for DP Energy’s offshore wind sites. The map outlines the first five proposed areas in which DP Energy has begun development and feasibility works in the hope of progressing to a feasibility and then commercial licence. These areas are off the coast of Warrnambool in Western Victoria, Wonthaggi and Port Albert in the Gippsland Region, and Wollongong and Newcastle areas in NSW. 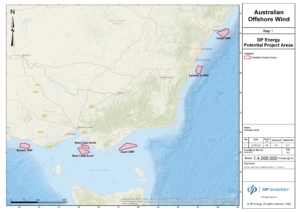 The Crown Estate identifies Gwynt Glas Area of Search within its Plans to Deliver...

This site uses cookies. By continuing to browse the site, you are agreeing to our use of cookies.

We may request cookies to be set on your device. We use cookies to let us know when you visit our websites, how you interact with us, to enrich your user experience, and to customize your relationship with our website.

Click on the different category headings to find out more. You can also change some of your preferences. Note that blocking some types of cookies may impact your experience on our websites and the services we are able to offer.

These cookies are strictly necessary to provide you with services available through our website and to use some of its features.

Because these cookies are strictly necessary to deliver the website, refusing them will have impact how our site functions. You always can block or delete cookies by changing your browser settings and force blocking all cookies on this website. But this will always prompt you to accept/refuse cookies when revisiting our site.

We fully respect if you want to refuse cookies but to avoid asking you again and again kindly allow us to store a cookie for that. You are free to opt out any time or opt in for other cookies to get a better experience. If you refuse cookies we will remove all set cookies in our domain.

We provide you with a list of stored cookies on your computer in our domain so you can check what we stored. Due to security reasons we are not able to show or modify cookies from other domains. You can check these in your browser security settings.

We also use different external services like Google Webfonts, Google Maps, and external Video providers. Since these providers may collect personal data like your IP address we allow you to block them here. Please be aware that this might heavily reduce the functionality and appearance of our site. Changes will take effect once you reload the page.